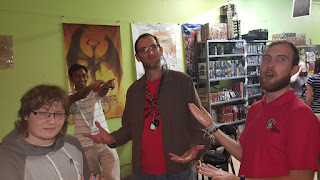 The above image is proof that the man actually exists. Nice shirt too. There were many cries of amazement at seeing him finally, although in some cases it was more of a shrug (see exhibit b, Kevin, lower left hand corner)

So we has some fun last night, spending too much money as usual and throwing dice around! Battle reports will follow soon so keep your eyes peeled. Unfortunately I forgot to take some pictures of the battle between Andrea and i, but we'll make up for it later.

BTW: the Unseen Shoppe has some of the white dwarves with the free pins available! they're running out!!
Posted by Eonblue at 2:26 AM

Email ThisBlogThis!Share to TwitterShare to FacebookShare to Pinterest
Labels: Ramblings