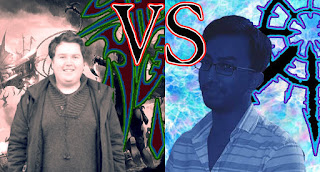 James' Dark Eldar and Jashin's Forces of Chaos went head to head in battle. Here is what happened: 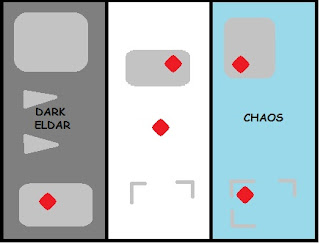 The Dark Eldar Cabal, known only as “The Circus” deployed first, but the master of plans, Tzeentch, was with the daemonic legions of Verum Venatores as they successfully seized the initiative, startling the Dark Eldar pirates and upsetting their plans. To add insult to injury, the Dark Eldar were planning to make use of night fighting, but the fates clearly favoured the legions of Chaos today and dawn broke earlier than one would expect. Early rays of radiant sunbeams illuminated the snowy, soon to be blooded, battlefield.

Turn 1 Verum Venatores
Not expecting to have gotten the first move the vast majority of the chaos forces had deployed far back in order to goad the Dark Eldar forward into carefully designed killing fields.
The screamers and heralds joined as one and proceeded to buff their invulnerable saves into the stratosphere with cursed earth and the grimoire of true names. Taking advantage of the cursed earth, Daemon Prince Vin’aeoroth hovered behind the heralds to protect them from any surprise deep strikes.
With the sheer amount of psykers on the chaos side (total warp charges 17 plus roll of 6 extra dice), warp charges were plentiful and expended by the handful to ensure the success of multiple castings of cursed earth. Despite that, enough warp charges were left over to summon a squad of bloodletters and a squad of flamers which deepstriked safely onto the cursed earth ahead of the screamers.
Thus ended the first turn of Chaos, only moving a few units closer to the enemy in order to bait them. Tzeentch could afford to be patient.

Turn 1 The Circus
Despite the loss of the first move, the commander of the Circus’ forces rallied quickly, moving his raiders, venoms and ravagers closer to the chaotic legions getting ready to unleash an obscene amount of esoteric xenos ammunition upon the forces of great manipulator.
The screamerstar drew the majority of the dark eldar firepower, but easily absorbed the xenos fusillade with not a wound taken.
Deciding to prey upon more susceptible prospects, a ravager opened up with 3 dark lances on the vanguard of summoned bloodletters, smooshing 2 of them into oblivion.
Blood had been drawn, and battle was joined.

Turn 2 Verum Venatores
Eager to unleash the fires of change upon these malevolent space elves, reserves poured in: first a squad of daemonettes sliced open reality and manifested within nearby ruins, preparing to glut upon the souls of their favoured species. Then a pair of obliterator brothers’ teleported behind the screamerstar, ready to compare their own infernal firepower to that of these aliens.
After ensuring the screamerstar was nigh invulnerable for another turn, the favoured of tzeentch turned their magical talents to bolstering their ranks further by summoning a set of flamers to the battlefield and by sacrificing one of their own, opening a rift wide enough for the Daemonic Avatar of the Blood God himself to make his presence known: a mighty bloodthirster manifested in the skies above, seeking to whet his axe blade and sate his bloodlust. 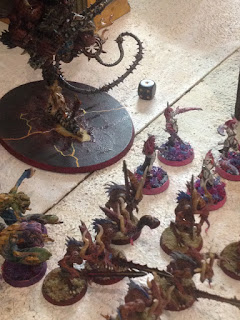 In an incredible display of marksmanship (and lucky plasma cannon rolls), the obliterator brothers annihilated a venom and a raider, securing first blood and severely damaging the trueborn and kabalite passengers, grounding them and leaving them ripe for picking. 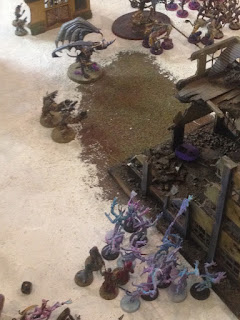 Turn 2 The Circus
Despite the loss of a pair of their transports, the Circus got ready to retaliate. HARD. Ravagers and Raiders packed with kabalites with twin-linked splinter rifles opened up an obscene fire-show, picking apart the daemonic line and their erstwhile mortal allies, causing a unit of cultists who had secured an objective, to fall back to preserve the remainder of the squad.
The Archon finally deigned to grace the battlefield with his esteemed presence, descending below the clouds in his personal Raider and surrounded by his menagerie. He opened up fire on the obliterator brothers, instantly vaporising one into a puff of brimstone scented smoke. 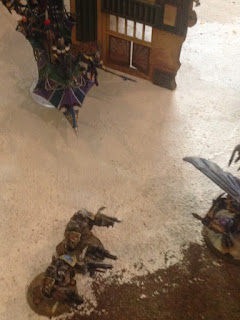 Turn 3 Verum Venatores
Panicking slightly about the uninvited guest deep within friendly territory, the forces of chaos redeployed to combat this new threat, while the timely arrival of a helturkey flew forward to fend off the approaching barges of the circus. 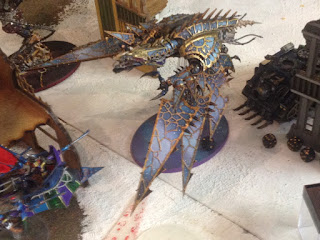 The Daemon prince Vin’aeoroth had landed the prior turn and turned his attention to the Archon’s vessel, the lone remaining obliterator, furious at the demise of his brother, advanced towards the vessel, intent on turning into a melted pile of slag. Despite a furious psychic and physical barrage of firepower, the archons transport survived, with a single hull point remaining. Annoyed beyond words, the obliterator, Daemon-prince and a squad of sacrificial cultists ran towards the vehicle to smash it apart in brutal melee, which they did quickly, and lost a few cultists in the resultant explosion. Then the archon and his court appeared, free to wreak havoc in the enemy rear-guard in their turn.
The screamerstar meanwhile, along with their summoned reinforcements set about assaulting the many elements of the circus, with the aim of contesting and holding as many objectives as possible.
The summoned flamers and heldrake in particular wreaked havoc upon the transports, frying the passengers while leaving the transports mostly unharmed.
The daemonettes, driven to almost orgasmic ecstasy, found their path to the divine pleasure of glutting upon eldar souls blocked by one of the strongest creations of the haemonculi: the talos, and were forced to confront it before proceeding to their intended target. 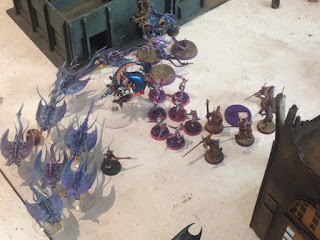 The screamerstar charged the rearmost ravage in a conga line, completely chewing it to bits, but afterwards had found that they had left the 4 heralds completely exposed to the enemy at the tail of the conga line. 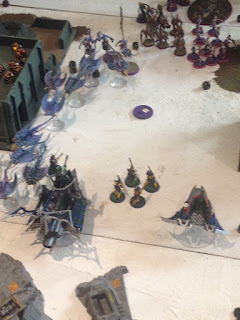 Turn 3 The Circus
Seizing a huge opportunity, a lone raider, packed with kabalites, unleashed a terrible onslaught upon the exposed heralds, annihilating the remaining 3 and killing the warlord, as well as breaking apart the screamerstar that had caused the deaths of so many of their kin.
Looking to capitalise on the success of his kin, the Archon and his court of grotesques and Urien Rakarth charged the lone obliterator and slowly dismembered him before Urien grew bored and melted his soft and squishy insides with an ichor injector, risking the ire of his Archon master by depriving him of further enjoyment with his daemon toy. 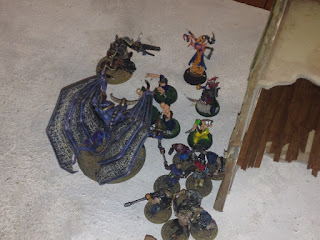 Elsewhere, the talos and daemonettes fought each other to a brutal standstill each managing to inflict the same amount of damage to each other.

Turn 4 Verum Venatores
After annihilating the majority of the vehicles, leaving only their passengers below, the heldrake flew towards the enemy deployment zone seeking new prey and found the lone, remaining raider. Despite his burning breath, the sturdier-than-it-looked raider stood fast, resisting all damage. Alas, the same could not be said for the passengers, 2 of whom cooked in the baleflames of the heldrake.
The Screamers, deprived of their magical protection, zoomed to the enemy deployment zone and grabbed an unclaimed, uncontested objective, intending to provide tzeentch with 4 points (linebreaker and the objective worth 3).
The Daemon prince Vin’aeoroth and his loyal cultists charged the court of the archon, intent on smashing this upstart dark elf and were provided covering fire by a squad of nearby horrors, who barely managed to thin the ranks of the Archon.
The Archon, seeing an opportunity to become stronger by whetting his blade, issued a challenge, Vin’aeoroth, being the daemon of tzeentch that he is, “nominated” the cultist squad leader for this honor. Before so much as a blink could occur, the Archon was bathed in the blood of the offered cult leader and sought more victims to increase his power further. In retaliation, Vin’aeoroth swung his black mace wildly around him, smashing apart a grotesque and wounding another, while the Urien took a parting blow to the face, but was so doped up on Panado that he ignored it.

Turn 4 The Circus
By now, Panado pain-killers had been distributed to all the members of the circus, thus enabling them to go toe-to-toe with the invulnerable saves of the daemons they fought.
Small combats erupted all over the battlefield and progress was made. Urien and his grotesques in particular were very amused when Vin’aeoroth, in his excitement at the prospect of smashing the dark eldar, lost control of his mace and caved in part of his skull. Seizing this opportunity the pet grotesques jumped on Vin’aeoroth and tore him apart till only his cursed mace remained.
Despite the loss of their leader and God-daemon prince, the remaining cultists fought with an unheard-of furiosity and killed a grotesque in retaliation, amazing both sides. This amazement was brought to an abrupt end when the archon stared daggers at them and they died. From the daggers.

Turn 5 Verum Venatores
The heldrake, seeing as there was a severe lack of targets for which to burn, switched to hover mode to allow another pot shot at the raider that lived as well as grab another objective in the process. Amazingly the raider stood firm yet again! However, the same could not be said for the passengers who lost another 2 of their number to the balefire of the drake.
A vindicator trundled out of the ruins it had been hiding, I mean, “strategically waiting” in and blasted apart a squad of kabalites that were left stranded in the wake of a heldrake ripping apart their transport the previous turn.
The bloodthirster and the horrors both decided to join the fight against the very slowly dwindling court of the archon. The bloodthirster (who goes by the alias “Mr. Thirsty”) was particularly eager to meet such worthy food items. Upon crashing into the combat, he was quickly ambushed by the shadowfield cloaked Archon who challenged him to single combat. Predictably, the bloodthirster crushed him (As all his attacks were instant death against a toughness 3 character), needing only a single failed save to win the challenge and gain the slay the warlord point. The horrors danced for joy and succeeded in surviving the wrath of the rest of the dark court.
Elsewhere, the daemonettes and talos tickled each other with their sharp ‘n pointy bits.

Turn 5 The Circus
As almost everything was locked in melee all over the snow covered battlefield, the dark eldar turn was very quick. The bloodthirster, disappointed that the Archon had not proved challenging enough, lazily swung his axe around in the air instead of at Urien Rakarth and his pets. Sighing deeply over the corpse of his boss, Urien decided to earn his pay by stabbing the right gluteus maximus of Mr. Thirsty and melting his insides too, while his pets ate the psychedelic horrors dancing around them. 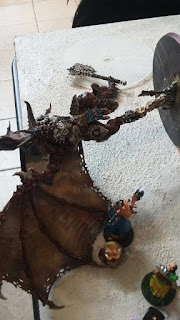 Turn 6 Verum Venatores
The heldrake, camped over an objective fired yet ANOTHER pot shot into the lone, surviving raider. AGAIN, the raider was unscathed, but served as an oven to cook all the remaining passengers. Not every thanksgiving weekend that a helturkey bakes others instead of being baked itself.
The vindicator, trying to make itself more useful, fired through a building and blew apart the last pet of the haemonculus, leaving only Urien behind.
Elsewhere, the daemonettes and bloodletters finished up their assaults and consolidated towards objectives.

Turn 6 The Circus
The crows started circling the battlefield, waiting impatiently for their turn to join the festivities, but the dark eldar had one last chance to deny the forces of chaos total victory. The indestructible raider flew towards the pair of daemonettes holding the central objective and fired 3 disintegrator cannon shots into the slaaneshi daemons. And MISSED.
And with that, the battle of Snowy McSnowville had come to an end, with the dancing daemons of tzeentch capering all over the battlefield and a lone haemonculi awaiting his invincible raider Uber to go back home.

Thanks guys for an Awesome Battle Report!!!