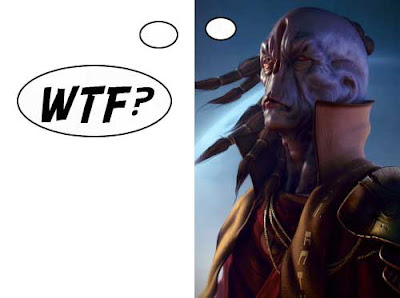 So there is a bit of a furor across the inter webs concerning the new Tau Coordinated Firepower Rule. This rule comes into play when fielding a Tau Hunter Contingent.

The interpretation of the rule seems to imply that when each of the units fire "as one unit" any and all USR's that any of those units have will then be shared across all of the units. As usual there are many outcries of OP and rules bending and basically many feel that this gives the Tau an unfair advantage, Give it a little thought and think of the possibilities that could ensue if one adds a Buffmander to the equation.

Yet to me it doesn't seem as bad as it could be. In some cases it could be a detriment to the Tau. According to the BRB, a player must select a unit, declare the target and then shoot with one type of weapon at a time. In the coordinated firepower rule, it doesn't state that each unit adding to the attack must be declared, so once one unit has shot, the next can add their firepower, and then a third. This however means that only the third unit will gain from the BS bonus. Another case is if all units are declared at first, then all will gain the BS Bonus, and yet, if the first unit wipes out the target, the remaining units will have nothing to shoot at.

If a player makes a mistake of including the Stormsurge in the attack, then the gargantuan rule of firing all of their weapons at separate targets is nullified by the line "These units must shoot the same target", although one might argue that it doesn't state "all of their weapons".

Adding Splitfire to the unit doesn't help them, as only one model of the three units can shoot another unit.

If we look at some of the other codeces that have come out this year and compare their army specefic detachments (Necron Decurion, Eldar Warhost etc) is there a balance? Is this a good answer to the deathstars that have been running rampant through the game? Do house rules need to be placed?

I understand that have a unit of crisis suits and firewarriors gain skyfire, tank hunter and whatever else the Tau Commander gives them due to this rule could be seen as an unfair advantage, but then thats only gonna be two units dead anyway, leaving the rest of your army to run rampant. I Personally feel that any player that bases their entire army on one deathstar should suffer anyway.

How do you feel about it?