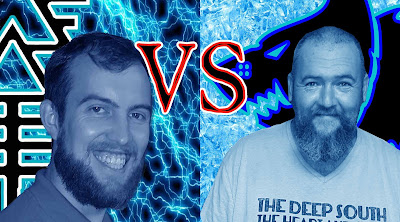 Brad's Eldar and Stephen's Space Wolves had a furious game of dice throwing. Here's their take on it: 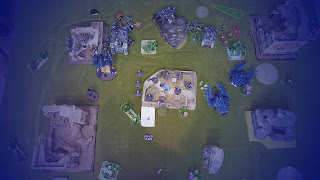 Before the latest Eldar codex dropped I had wanted to build a Wraith list and so I painted up 15 Wraith Guard with Wraith-cannons and 5 with D scythes. So I set out to finally play with these models. I decided to Run the Wraith host with an aspect formation as backup


The game was relic. My warlord trait was the eldar one to reroll armour saves of 1.
Eldar had first turn and killed Stephans vindicator and his infiltrating marine unit. I moved my Wraiths into a ruin and had cast Conceal on them each turn so they had a 2+ cover save each turn.
In Turn Two I killed his Landraider with the 10 man Wraith Squad, causing about 7 Hull points worth of damage. 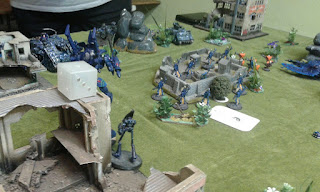 I then had them charged by his thunder hammer storm shield terminators and Red Maw his HQ. I hit in overwatch and rolled a 6 so vaped one of his average squad members. The Wraith couldn't cause any wounds and were minced up in one round of combat. 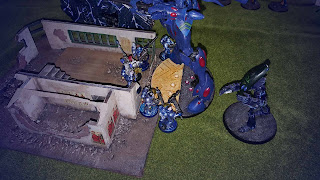 The wraith scythes moved up and killed his scouts in a ruin and my warpspiders and a unit of Dark reapers killed his predator.
I started out just wanting to play this list and after a describing this list to my opponent I could just feel how strong it was verse his wolves. I don't think this list will be as strong against a very competitive list so will need to play test it a bit more (against an opponent who is ready to test it) 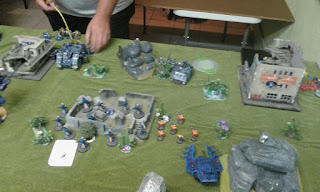 Stephen:
The Space Wolves faced of against Eldar CHEESE.

Eldar brought a minimum of 39 shots of AP2 per turn of Cheese and the Space Wolves brought no crackers. This Lead to a victory by the Eldar.The Space Wolves conceded the match to the Eldar at the start of the fifth turn. Had the Game gone on to 6 turns the best the Space Wolves could have achieved was a loss of 5-2.
The Space Wolves had no answer for what the Eldar brought to the table. The only impressive point in the Space Wolves game was the way the terminators destroyed what ever they got into combat with. This was short lived by the Eldar shooting at AP2.
The game went one way: Eldar shot everything and the wolves killed some stuff of with combat. So instead of giving a battle report this time Im going to give ideas of how to handle the Eldar going forward. 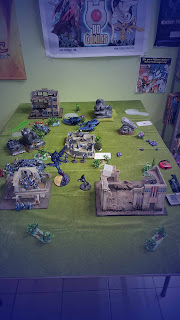 There was two main points taken away from the game. First getting past the shooting is the first priority. Second the Eldar dont stand up in combat to well.
Going forward the best way to handle the Eldar is in small units of troops and at least four of them. Run everything up the table as fast as you can using the troops as shield fodder and getting into combat as soon as possible. Keep in mind the Eldar shooting used was mainly flame templates and 12" range weapons. Should they get close enough to shoot, you have a good chance of getting into combat. When putting your units together take power weapons that can get past the toughness 6. Most of these weapons come with AP3 which will negate the Eldars Armour saves. Where possible get them into combat in the open. When assaulting, tactics are very important so always assault with an expendable unit first letting them take the overwatch and then with the unit you have set up for combat.

The Space Wolves have a rematch planned for Tuesday next week so whatch this space and see if these tactics worked.

Thanks guys for an awesome report!!
Posted by Eonblue at 9:45 PM