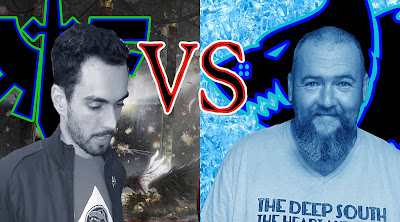 
Mission: Purge the Alien
The Dark Angels had the first turn and an attempt to steal it by the Space Wolves failed 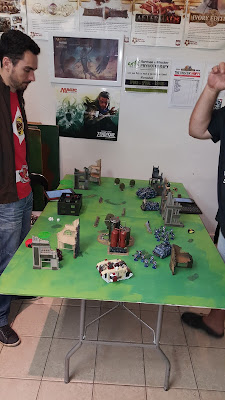 Ryan:
The higlights for me was definately my Deathwing knights surviving many attacks, his terminators completely killing mine after I deep striked and  my mistake of turbo boosting sammael off the board... costing me the game. 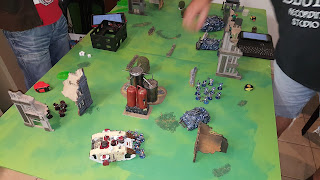 The biggest disappointment for the Space Wolves was the Scout unit. Although the Scouts with sniper rifles did get some good shots in, the missile launcher did not carry his weight. As he was able to shoot with skyfire he had only one objective and that was to take out the flyer used by the Dark Angels. He managed to score a hit in ever turn but not once did he get a glance or a pen.

Going into the last turn the score was 6-4 in favour of the Space Wolves. the Dark Angels killed of the Wolves warlord giving them 2 points (one for independent Characters being a unit and one for kill the warlord) this brought the game to a 6-6 draw had the game ended there. however Dark Angels made a fatal mistake by forgetting the primary objectives and flew there warlord off the table (even after the Space Wolves ask him if he is sure he wants to do that). This gave the Space Wolves 2 points resulting in a 8-6 victory for the Space Wolves.

It was a long and hard fought game by both sides.