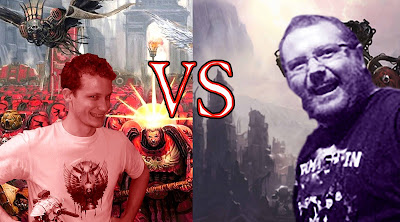 The Imperium's Car Mechanics had an argument with the Blood Angels over the last few days. Here's what happened:
Mission: Maelstrom Mission 3: Tactical Escalation
Short Board Edge Deployment 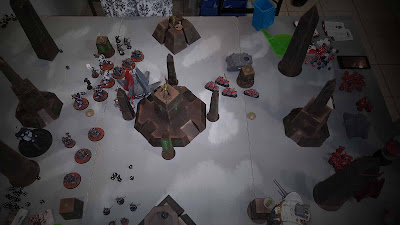 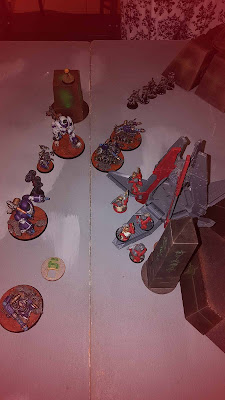 Darryn:
Bloody Hell Knights are Scary! the imperial knight shrugged off most of my firepower while casually ripping holes into my Destroyers and Dunecrawler. I did however get it down to one hull point by the end of the game. However i need to keep remember that the Dominus and the Datasmith's all have Data spikes. So did the Skitarii leader. thats a whole lot of free haywire attackes i didn't make on the knight.

To be honest though even though i\lost it was a helluva lot of fun watching the mechanicus shoot down almost everything that came too close. that firepower is AMAZING!!
Thanks Kyle for an awesome game! 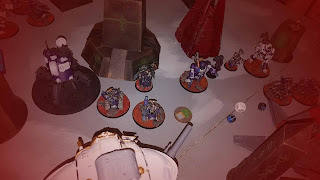 Kyle:
My Highlight is probably the drop podding tacticals wounding on 6's and still doing 4 unsaved wounds to T7 monstrous creatures. Kataphrons with their grav are terrifying!! The squad of monstrous creatures are pretty scary but they fluffed their save hilariously. The challenge against your lord who had the gauntlet of you could die or live (Uncreator Gauntlet) was fun.... Makes the challenges a lot more scary for walkers!!! 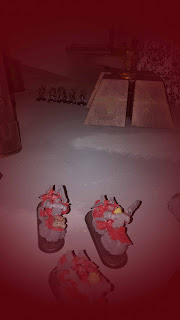 Blood Angels took a convincing win at the end of turn 5
Posted by Eonblue at 9:37 PM