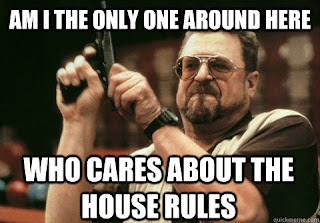 Games workshop has made a wonderful ruleset that basically throws its own rules into the grinder. which really doesn't help anything. At all.
Throughout the game there are countless loopholes and contradictions which cause a lot of arguments in all of the warhammer scenes. It is with this in mind that I have decided to group together some house rules here and allow some stability in our wargaming group. Also, ive decided to go the route of letting fluff take precedence. These rules are not set in stone, ,and if anyone can propose a good counter argument, we may change them.

This post is no longer valid!!! go here for the updated version!


So here are the ones we've come across:

Malefic Daemon Summoning
This rules is powerful. there's a lot of abuse prevalent in this one, and although one may argue that Chaos Daemons aren't very strong vs other armies, its the case where the other armies are using these powers that it gets out of hand. with that in mind the following rules apply:
- you can only summon it if you have the model. whether its yours or not is not a problem, but you have to have it. If you are using someone else's, make sure you've paid them well!
- Summoning a bloodthirster. The rulebook states its the bloodthirster from Codex: Chaos Daemons. When the three new versions came out, the white dwarf said they could be used in Codex:Chaos Daemons and Codex: Chaos Space Marines. No where did it state which one exactly! so with that in mind, we would like to propose that the player who summons a Bloodthirster should roll a d6.
1-2 - Bloodthirster of Unfettered Fury
3-4 - bloodthirster of Insensate Rage
5-6 - Wrath of Khorne Bloodthirster
I feel that this perfectly represents the fickle nature of Chaos. The god's decide what Greater Daemon you will get! This may be seen as a contradiction to the previous house rule, that if someone has an insensate rage 'thirster then they can't summon a Wrath of khorne, but in this case, we'll allow whichever one to proxy the other.

Tau Coordinated Firepower
This rule is painful. So many counter arguments and so many tears wept. Lets keep it fluffy shall we?
A monstrous creature can't share its innate abilities with everyone, cause everyone else isn't as fat. linking targeting protocols across a wide range network by using markerlights does make sense, because the Tau technology is based on this. however overloading the bandwidth by throwing puretide engram protocols and other crazy things doesn't make sense.
With this in mind, only Markerlight abilities are shared. all other rules for shooting are obeyed, but no Universal Special Rules are shared with other units.

Perils of the Warp and Brotherhood of Psykers
This is what the rule book says:

So if the perils is passed and everyone gets the bonus... Sorry, only one guy is gonna get it.
(this is more a clarification than a house rule)

The Rule Book states it again, I don't think i need to say more...

Gargantuans are the stuff of nightmares. They are monsters that can do crazy things most normal creatures couldn't. We can argue the definition of "each" till the sun goes down but yes, gargantuans will shoot at whatever they want.

That's all I can think of for now. Yes some of it is pretty straight forward, but we have argued the definitions before.