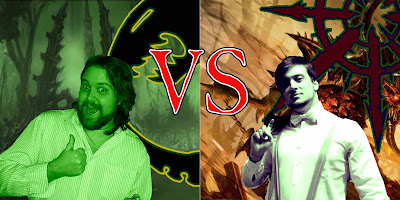 Tyranids VS chaos Daemons.... What else can be said? Its brutal!
Shane and Andrea had a game of who-has-more- models-on-the-board. Here's their report on what happened: 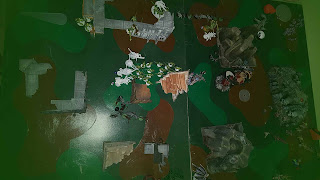 The Forces of Chaos and the Hive Mind clash on a consumed planet.
Be'Lakor and Kairos have joined their efforts, not happy with the loss of so many worshippers,
Karios Fateweaver and Be'Lakor The Dark Master have summoned a Kytan Daemon Engine of Khorne known as "The  Warp Butcher", his real name known only to the Dark Master, who secretly promised one of the two heads of Fateweaver in exchange for his Cleaver.

Shane:
I got wrecked by that Kytan Daemon Engine but that was amusing. Highlights had to be my 1st shot against the Kytan getting 2 glances and a pen. And the other being my hormagaunts coming back 3 turns in a row.
As for tactics, I still have a lot to learn, but I tried a method that I like to call bubble wrap. Basically my gaunts surrounded his big unit to minimise damage and they kept coming back, so there was a line of them. And my artillery dealt with the rest... Unfortunately it was a relic game so i couldn't get it off the big guy

Andrea:
The first turn saw The hive mind directing a LOT of fire on the sneaky Nurglings that infiltrated on top of the Relic and claimed it. Being shrouded they can rely on a very good cover save, still, so much firepower overwhelmed the protection of father Nurgle and the 3 bases of nurglings were poorly vaporized giving first blood to the Hive Mind. More firepower wa directed on The Kytan Engine, 3 hits were successful, but Khorne prevented two of them before they could injure his favorite "barber". Two units of zoanthropes sent blasts of energy at the Kytan, trying to blow it up too, but not many hits reached the target. Some gaunts secured the relic and waited for the wrath of Daemons to hit them.
The daemon Butcher is unstoppable; with the use of the fell Grimoire of True Names, The Dark One's protection around him became even thicker and Fateweaver added his knowledge to guide The Dark
Bullets to the target, dealing 3 wounds to the Exocrine. The Butcher charged termagaunts and wiped them out, taking control of the Relic.

In Turn Two the Hive mind sent more drones to make a bubble around The Warp Butcher, the zoanthropes tried again to hammer at the hull of the Kytan but the fell powers successfully protectged the daemonic Engine. The flying tyrant moved towards the rear armour of the Butcher but nothing could penetrate it's hide. 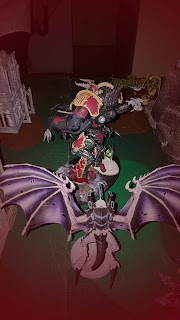 Pyrovores sent blasts of burning ichor across the board to wipe out some pink horrors and reduce the grip of Daemons on the warp.

In the Daemons second turn, Fateweaver commanded his personal minion to direct the protection of the grimoire on himself, worried about the approaching hive tyrant. Some more gaunts were killed and the Exocrine is taken down by the shooting of the Kytan Engine.

During the following turn The hive mind siezed the opportunity of dealing damage to the Warp Butcher while the protection of The Dark powers is focused elsewhere. Zoanthropes focused their mind powers on The metal giant and find their way between fell spells and daemonic runes: Two more hullpoints are taken from the walking monstrosity, and with the one lost previously regained The Butcher Is had only 4 left.
2 units of gaunts shot into the sky at Be'Lakor and Fateweaver, and although the fire power is considerable, Fateweaver suffered one wound but didn't hit the ground, The shadows surrounding The Dark Master are too thick and no shot managed To hit the first Daemon prince. Pyrovores kept munching lesser daemons with their burning projectiles.
In the daemon phase, Fateweaver few over the powerful Hive Tyrant, dealing him One wound, and decided to protect the precious Kytan carrying The Relic With all The means in his heads.  The book was used again to buff the protection, and he cast himself a bubble of protection around him, getting close To The giant.
A blast of tzeentchian fire was sent against some gaunts trying to block the way of The Kytan, completely wiping them out with the combined shooting from The Kytan. The next target of the assault were some Warriors, who were turned into a fine red mist by the Butcher, healing his hullpoints back up to 5.
The Hive mind tried to stop the Kytan once again, sending the Tyrant to shoot his brainworms at the back of the Walker but nothing can be done against the protection of the Dark powers combined with the personal will of Fateweaver (2++ in that turn). Zoanthropes trie to achieve the same goal with their mind powers but Khorne has his eye on his precious toy and doesn't allow mind tricks on him.


The last turn of The Game, a unit of pink horrors tried to turn into a Bloodthirster but The eye of Khorne is fixed upon his bloodied creation and doesn't grant his favour. Fateweaver and Be'Lakor combined their flying assault to kill the Flying Tyrant successfully earning "Slay The warloard". Fateweaver managed to kill 2 out of 3 Zoanthropes with some Tzeentch fire, showing them who is the real master of the warp energies. The Warp Butcher slaughtered all the Pyrovores with hellish rounds guided by the will of Faithweaver, and then crushed into the last Zoanthrope after a successful long charge. Without even fighting, the heavy mass of the metal construct pulped the brain of the Zoanthope. The Hive mind called  the game and The Relic Is secured back into The Warp by The Daemons, The Dark Master already seeking opportunity To steal it from The grasp of Fateweaver.

The Kytan Engine Was definitely The Hard To kill unit in The Game, though it would have been killed quite easily without The protection from The Book and Kairos. A powerful unit without any doubt but it's not something that can resist no matter what.

Those pyrovores Are nasty and powerful, and The Zoanthropes Can deal serious damage To everything that moves on The board.

A fun Game, i wanted To try The Kytan Engine, and against a Horde army it actually Can suffer If not well addressed.


Thanks guys for an awesome report!
Posted by Eonblue at 2:01 AM