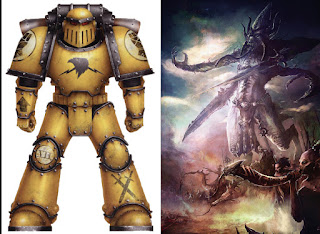 Matty had a shot with his 30k Imperial Fists against Jashin's Chaos forces. Here is their battle report:

With the upcoming Crux Terminatus tournament to be held at the Batcave, Matt wanted to test out a 30k 1000 point list vs a 40k adversary after hearing that 30k was very under powered against 40k armies in lower point’s games. With Matt’s plan to take a 30k force to the tournament primarily to spark interest in 30k, he sent out a challenge at which Jash readily accepted.

Matt’s Comments
To be honest with what I had read I was expecting to come into this game with not the greatest of odds or expectations, boy was I surprised. Yet again my breacher marines seemed to perform way better than I have read and finally my Sicaran did some good work with its guns. This list proved to perform way above what I imagined and got the brain thinking on its potential in the future. Best moments were 5 breachers holding up an Obliterator in combat for 3 turns, the Sicaran getting its points back and more and my Praetor bringing the Lord of Change to its death in one swift combat, and finally the fact that I only managed to lose 1 unit in the game being the landspeeder. Thanks must go to Jash for giving me the chance to test this list out and quickly too.

Jash’s Comments
Highlight of the game was to finally get my heldrake onto the field within turn 3 only for it to
be shot out of the sky the next turn by the sicaran. This was also my low point. Matt did make maximum use of his army’s bonuses. The selected mission did work against me here as those summoning shenanigans I was counting on as insurance just left more units for Matt to potentially gain victory points with. If fewer 1’s were rolled on my side and less 6’s on Matt’s, the game might have been a lot closer.

8 points to 1 victory for the 30k Imperial fists!