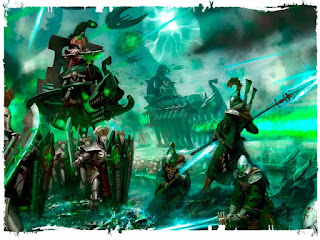 Some news and updates for everyone:
DWGC Warhammer 40k League
The tension is heating up as the league is starting to draw to a close. There are some definite leaders on top, but a few wins by those below can shift the tides amazingly. The League Scores have been updated to reflect all of the recorded games to date. Click here to see the details.

Tonight's Games
So far we have the following players battling it out at the Unseen Shoppe tonight.
Andrea VS James
Andrea's Slaaneshi Daemons are out hunting for the souls of James's Dark Eldar tonight in a 1850 point game of mass slaughter.

Bradley VS Darryn
The War in Heaven comes to the Shoppe as the Necrons seek vengeance against the Eldar. This is a game that's been long in coming.

Stephen VS Jashin
Space wolves bring their furry friends to fend of the Daemonic horde of Jashin's Chaos marines and Daemons. 1850 points of crazy shenanigans ensue!

Matty VS Kevin
What happens when two guys break open two boxes of Betrayal at Calth and assemble them in a hasty fashion? Why, a game of Horus Heresy of course! The first warhammer 30k battle ever in the Unseen Shoppe!

Time is running out!
There arte only two official club days left to get your League games in; tonight and Sunday the 13th. Of course any other games played on non official days count as well! Lets get this league going guys!

And that's all i can think of for now. keep your eyes on the blog for some battle reports and other stuff!

Email ThisBlogThis!Share to TwitterShare to FacebookShare to Pinterest
Labels: Ramblings, Rumours and News