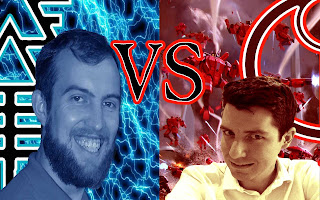 In an age old grudge match, Brad and Mark had it out in one of the final telling league games of this year.

Mark:
"Farseer, your repeated attempts at negotiation have been and will continue to be met with the disdain they deserve. We do not negotiate. We are the screams of the dying, we are the blade in the dark, we are your souls last shuddering breath. We are The Terror. Blood for the blood God."

Bradley:
*shrugs*
"I think  these fish have expired grand seer" -warlock
"They must be removed... For the greater good, as they say"- Farseer Lairelandon

Pre-game
Eldar elected to deploy first and take first turn.
After deployment Brad made use of his warlord trait to redeploy his wraithknight and wave serpent in the midfield to make for an aggressive first turn.
However the meticulous planning of the mon’tau war council paid off as they anticipated this action and seized the initiative (Bradley continues swearing)

Tau
Breachers advanced up the field down the left and centre, Wraithknight and wave serpent were caught in a withering hail of crossfire and granted first blood. (Swearing intensifies)
Eldar
Advancing breachers in the centre are flamered mercilessly by wraithblades, bunch of wounds taken off the stormsurge by dark reapers
Turn 2
Tau
Breachers on the left side clean up the reapers deployed on that side, massed firepower eviscerates the wraithblades. A long range hammerhead shot destroys the nightspinners main weapon.
Eldar
Remaining units hunker down and wait for reinforcements, warp spiders, rangers and war wallkers come in from reserve and blow up a hammerhead. Gun emplacements cause remaining breachers to panic. 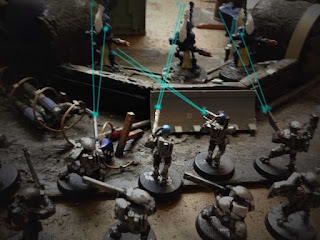 Turn 3
Tau
Warp spiders fuck up my whole bouncing around like little bitches, causing my crisis suits in their frustration to obliterate their own pathfinder squad. Frustrating turn for the tau.
Eldar
Warwalkers blow up the sky ray, commander loses some drones to artillery but takes it like a man
Turn 4
Tau
Warp spiders can’t jump far enough to escape my wrath and get obliterated by a hammerhead, war walkers and rangers meet similar fates.
Eldar
Dire avengers coming in from reserve blow up one of my hammerheads
Turn 5
Tau
In revenge a unit of dire avengers gets popped by my hammerhead
Eldar
Remaining units bunker down, farseers tries a brave but ill fated attempt to mind war the riptide
Impartial roll off and game continues
Turn 6
Tau
Mop up remaining eldar, gloat in an unbecoming fashion.

Commander Cannonfist surveyed the carnage of the battlefield, the remains of the Eldar warhost little more than rubble and blood after the actions of the day.
A mighty foe crushed and a multitude of sacrifices for the Blood God.