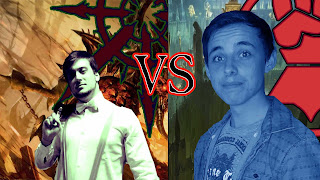 Andrea and Daniel threw some dice at each other and here are the results.
Chaos Daemons 1850 pts
Combined Arms Detachment
Kairos
Be'Lakor
nurglinGs
squad of 11 horrors
soulgrinder of nurgle With baleful bombardment
Kytan Engine of Khorne..

Highlights:
- Daniel took 3 hullpoints off the Kytan
- Kytan charged into the Bikes, One survived.
- Horrors turned into a Wrath of Khorne Bloodthirster (giving Daniel first blood).
- Daniel tried to shoot the Bloodthirster as the Kytan was locked in combat. He dealt it one wound but the Thrister  was ablt to stay in the air.
- Kairos and Belakor stayed hidden, casting buffs over the Kytan.
- the Kytan moved towards the Knight, The WarpStorm hit the Knight and forced him to use his ion shields on the front leaving the side facings open to 8 S8 shots. 6 hits and 4 hullpoints removed!.
- The Kytan Engine charged the knight, tearing it apart. The explosion wrecked 2 rhinos nearby and leaving the other 2 with one and two hullpoints left..
- The dreadnought started a solitary hunt for a squad of horrors; by turn 3 he was close enough to be dangerous, The herald cursed the earth around him and summoned 10 daemonettes who literally bubblewrapped The dreadnought.
- in the last turn the  Kytan Engine was down to 2 hullpoints from shooting, The soul grinder wrecked one rhino and shot a squad of marines in the back.. The Thirster flamed the remaining Marines and they failed their armour saves. The Kytan removed the last rhino from the board with gatling fire
- the final charge of the game saw Belakor and the Kytan Daemon Engine pile into the last two squads of Marines..