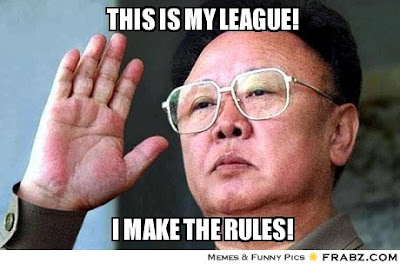 Games Workshop sucks balls. Their lack of FAQ's and vague interpretations are absolutely and utterly annoying. I tried to make a post earlier on concerning house rules but after further debate it seems that they definately do not work. Hence I propose the following:
Occam's Razor:


Among competing hypotheses, the one with the fewest assumptions should be selected

We can apply that principle to the game in the following ways:
- whichever interpretation is the simplest and requires the least book-keeping (rules combinations etc) sticks
- Whichever rule is the most fun for BOTH players sticks (this is a GAME).

I don't see why, after taking the above into consideration, there should be any arguments after, unless of course the player wants to be facetious.

Important!!
Firstly the above image is not stating that I am the be all and end all on rules for the league. Its a joke; take it that way. Secondly the reason why we play this game is to have fun, or in some cases feed an obsession (my bad). We ALL want to have fun. We spend a lot of time assembling, painting and coming up with strategies for our little plastic men, nevermind the oodles of cash we spend on it. If we can't address the problem that Games Workshop has created we ruin the game for other people.

So unless there are any blaring obvious lines of text that declare exactly how a rule works, we must take the simplest interpretation as the final. Please note that I am not arguing Rules as Written or Rules as Intended. I hate both of those terms.

So:
Summoning a Bloodthirster:
- Use whatever model you have available and apply its rules. or choose.

Coordinated Firepower:
- at first it seemed simpler to say only markerlights apply. but then this came out:

Its an email between one person and a GW representative. The words "shooting as one unit" really do allow any USR's that crossover models to apply to all units that are taking part. However all bonuses gained by using this rule only apply if all units taking part shoot at THE SAME UNIT.
To clarify:
- Gargantuan creatures can shoot at anyone one they want, but will only benefit from the additional rules if they shoot at the same target as everyone else.
- all models may get the Target Lock ability due to whatever Tau shenanigans, but they will only ever gain any further abilities if they fire at the SAME UNIT. (there is the possibility of a cyclic conundrum here, I don't want to get into it. Just step away damn you)

Blasts and Templates firing on Units occupying multiple floors
- Choose the floor - models on that floor are affected
- Barrage and ordnance affect whatever you can see from the top down. Floors will block damage for any unit not visible.)

Games workshop has not made a lock tight set of rules. there are many loopholes all over it, and we know them all. But the one thing I do not want is people arguing over stupid definitions.

Are there any other rules questions we need to go over? Is my reasoning wrong?
there is a comment section below... use it. 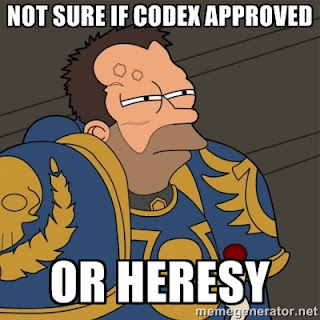