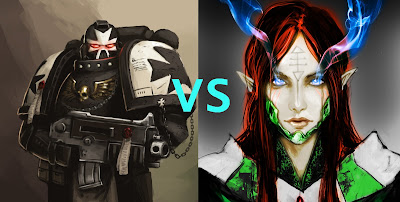 Cate's Eldar battled it out against Matt's Black Templar, in a winner-takes-all fight to the death. See the results here:

The Eldar of Craftworld Ulthwe claimed first turn, with Black Templar failing to seize the initiative.

The game started off at an alarming pace, as the Eldar Farseer sent off an apocalyptic large blast at two Land Raiders across the board. Eldritch Storm caused a glance on one Land Raider, while the other made a successful save.

Turn one saw one Land Raider immobilised by a volley of Brightlance fire, and the death of a Crusader Squad at the hands of Dark Reapers.

Black Templar weathered a lot of fire yet pushed up the board, stunning an Eldar War Walker with a penetrating hit, and deep striking in a Dreadnought to flame the Reaper squad. 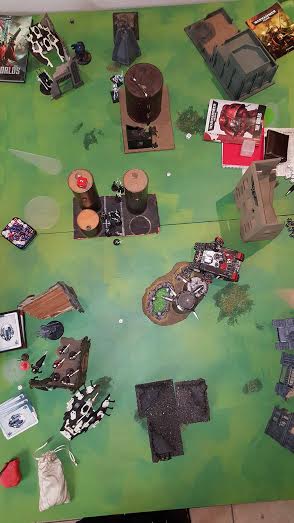 Black Templar move up the board toward the forces of Ulthwe

Eldar arrived with reserves, bringing in a squad of Warp Spiders and a Crimson Hunter. Wraithguard with D-scythes single-handedly opened up a Land Raider, and destroyed a full Terminator squad. The Wave Serpent failed a dangerous terrain test however, as it landed in terrain to deploy the Wraithguard, and was stuck immobilised with rear armour facing the enemy.

Black Templar charged the Wraithguard, annihilating the squad in one fell swoop with Crusaders and a Dreadnought. Crusaders consolidated, and advanced toward the Eldar infantry across the board. 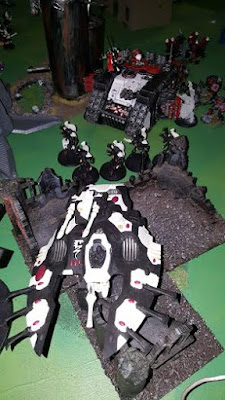 Rest of the Game:


Black Templar successfully killed off the stranded Wave Serpent with the Dreadnought, and destroyed the Dire Avengers and Spiritseer with the remaining Crusaders.

Dark Reapers swiftly finished off the last of the Crusaders once they were unengaged, and the Dreadnought eventually fell to a full army of Brightlances.

"The mightiest Dreadnought may be slain by one Brightlance. Ironclad was pierced by many".

Having taken heavy casualties early game, Black Templar couldn't pull the game around, especially with their Stom Raven deserting them until Turn 4. They did take a significant chunk out of the Eldar forces however, leaving the army more than a bit bloodied. 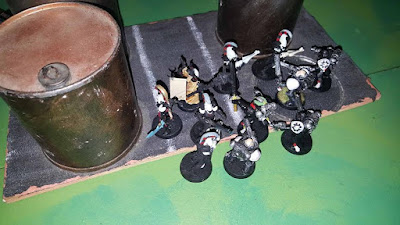 Marine blood was splattered across the field, and battered wraithbone lay amongst the carnage. Ultimately, Eldar had the Warp in their favour, allowing them to claim a victory against the Imperium.
Posted by Unknown at 10:27 AM