Age of Sigmar! The Season of War Has Begun! 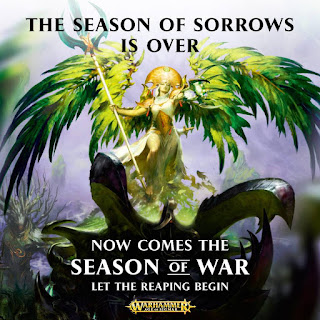 IT'S HERE! THE FIRST OFFICIAL AGE OF SIGMAR GLOBAL CAMPAIGN!
And it looks like its gonna be a lot of fun. Lines have been drawn, armies have been readied and all out war beckons.

(an apology on the silence for the last few months, its been a little uninspiring this side)

If you wanna read more about the Season of War, head on over to the site Games Workshop has made for the campaign. Lotsa cool details there, and its fun to see which alliance's are gaining power.
The Unseen Shoppe has been registered as one of the participating stores, and you can watch the balance of power here.

The Age of Sigmar game has taken a few leaps and bounds of late, with the General's Handbook entering the fray, and new army books like the Sylvaneth with new rules, formats and a whole lotta content for the game that adds so much to it that, unlike another game system, don't actually bog it down. Seems like there is some method in the madness.

So why not dust off your old models, and come join us for some games!

Email ThisBlogThis!Share to TwitterShare to FacebookShare to Pinterest
Labels: Age of Sigmar, Events