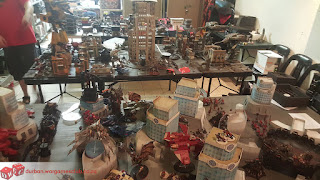 On the 22nd and 23rd of January 2016 the Chaos Legions, lead by Abaddon the Despoiler, descended upon The Unseen Shoppe in westville for a game of Apocalypse, the likes of which have never been seen before.
The combined forces of Tau, the Imperium and Eldar of all types did their best to fend off the Daemonic horde, but alas it was to no avail. Even with the immense might of a Warlord Titan, there was little they could do to stem the tide.

The Players:
Lords of the Black Crusade:

To see more head on over to Laser Cut Card and check out the Report Neal has written up: