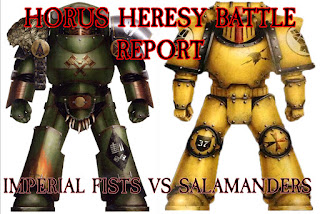 The end of 2015 was big with the eagerly awaited arrival of the Betrayal at Calth box set, giving many marine players a great opportunity to either bolster their 40k armies or start a 30k one! What happens when you get two guys who go the 30k route, well the very first 30k battle of course. Kevin’s Salamanders vs Matt’s Imperial Fists.
2000 points was decided on as well as maelstrom where Matt was fortunate enough to find some 30k maelstrom cards courtesy of the WH40k australia guys on youtube. These were really awesome and added a lot of fluff to the game.

Of course one had to be a traitor and the other a loyalist with a roll off happening and Matt selecting for his Fists to represent the emperor, as if they would turn on the Emperor.

The following were the lists brought: 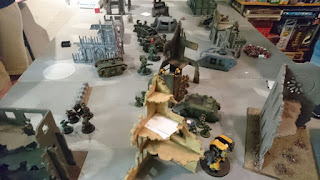 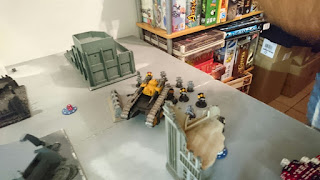 It was faster and more fun than the average game of 40k. I think the spicing up of the rules for marines, and the use of maelstrom made it this way. At first I felt a bit overwhelmed by the use of Sigismand, the Leviathan and Matt’s rite of war making his marines T5 with a shield, which was everyone and giving them BS5 when using bolters, making his blob squads of marines scary ! I was thinking I would get slaughtered early game, but maelstrom meant resources had to be split and that kept the big baddies at bay.That and with some lucky dice rolls meant the Leviathan wasn’t so much of a threat. The immobilizing it and destruction of the Sicaran gave me abit of breathing room. Overall it was a fun game and in future games I really must use my own rites of war as Salamanders and field their more specialised units. 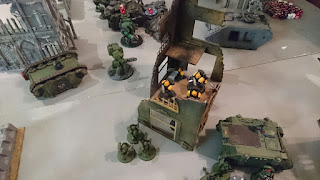 Wow this was so much fun. I have always been a loyal marine player with my Black Templars and Grey Knights but Heresy Imperial Fists are strong. My new favourite army for sure. I had not heard much great hype about the Breacher squads but I thought with my rite of war giving them T5 as well as my Terminators and my BS5 with bolters that it was well worth the try and my word did it pay off. These units became pretty much invincible, not only hard to hit but with decent saves and invulnerable saves on top of that, put them in cover and they even get stubborn. I was abit disappointed with how the Leviathan played, especially the Graviton bombard cannon as well as losing the Sicaran early on to a lot of glance hits, atleast he opened up a couple rhinos first. The Spartan assault cannon proved an absolute beast with 4 lascannon shots per turn, rerolling misses as well as the flare shield lowering the strength of incoming fire. What a great unit to sit Sigismand and his terminators in till they got close enough to fight. Sigismand is an absolute beast, him and his terms charged into Kevin’s and before Kevin could even strike back Sigismand had destroyed them all along with the chaplain in a challenge. Overall I was hugely impressed with how the units played, it has only increased my thirst for more. 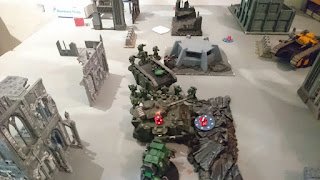 Salamanders man of the match:
This would be the Contemptor dreadnaught. This unit weathered a lot of fire, passing 4 5+ invulnerable saves in a row.

Imperial Fists Man of match:
Sigismand is a beast but with only 1 combat, man of match has to go to the Breachers. One squad which was 6 strong kept Kevins Praetor and bodyguards in combat for 3 turns, eventually succumbing but taking off two of the praetors wounds in the process. This was a game changer as it kept this unit from accomplishing objectives which was a massive plus.


Overall result 14 points to 4 to the Imperial Fists!

Thanks guys for an awesome Batrep!